Angkor Wat was built by the king of the Khmer Empire first as a Hindu, then a Buddhist temple complex. It is known as one of the largest monuments ever built. Hence, this great Buddhist temple provides clear, physical evidence that Hinduism and Buddhism were brought to the region by the Indians, and adopted by early Southeast Asian empires like the Khmer Empire.

The pagodas of Angkor Wat are also a physical depiction of the Hindu concept of Mandala. In addition, the gates of the temple also resemble the gates of the symbol of Mandala. This concept is Hindu in nature and is believed to have been brought to pre-modern Southeast Asia from India. It is probable that these ideas were then "borrowed" by the Khmer Empire, and depicted through its great temple.

Angkor Wat also has a Gopura. A Gopura is a monumental tower often built at the entrance of temples - a distinctive feature of South Indian architecture. The presence of this structure at Angkor Wat indicates that there was Indian influence in the architecture of the Khmer Empire.

In addition, the temple has many bas-reliefs depicting stories from the Indian epics, the Mahabharata and Ramayana. This shows that these stories were clearly influential in early Southeast Asia as they repeatedly adorn the walls of Angkor Wat, which was seen as a sacred and important place. This demonstrates just how strong Indian influence was in the Khmer Empire.

Furthermore, even though hundreds of years have passed, Angkor Wat is still a national symbol and major source of pride of Cambodia today. The fact that Indianisation of the Khmer Empire from the 7th to 14th century has continued to shape the heritage and identity of modern Cambodia indicates the lasting impact Indianisation had on the region.

Rough Layout of Angkor Wat
The Causeway into Angkor Wat 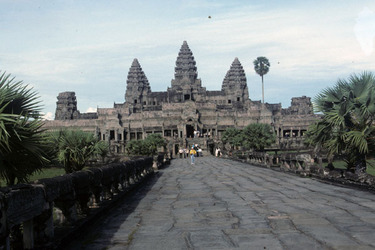 FIND OUT MORE: The History and Architecture of Angkor Wat:
Click here to continue.
Powered by