The theory of the vaishyas 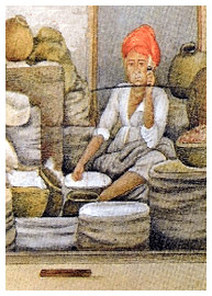 This theory postulates that Indian culture was transmitted through the Vaishya, the merchant caste.

Due to the fact that a wide diversity of cultures is still present in Southeast Asia today (see the previous segment), scholars arrived at the conclusion that Indianisation was a peaceful introduction of Indian culture, rather than through forceful means. Thus, it could not have been through the elitist Brahmins or conquest by the Kshatriyas.

This theory postulates that India's culture was transmitted through traders, through a mutual exchange of ideas. This is evident in that Southeast Asian cultures contain some Indian influences, and yet are not exactly similar to cultures in India. For example, batik, which is traditional to Java, has repetitive patterns and geometric shapes. These are a reflection of the concentric circles of the Hindu concept Mandala and are similar to the patterns on saris in India. This shows that Indian influence is present in the region, but has been combined with other indigenous cultures. Thus, it proves that India's culture was transmitted through peaceful exchange of ideas during interaction between traders and locals, as opposed to more forceful methods.

Furthermore, trade allowed the Indian merchants to travel around the region. This way, they would be able to spread Indian influence over a larger area, accounting for the widespread Indianisation of Southeast Asian countries all the way from Vietnam to Indonesia. (Find out more about the influence of Indian culture on the different regions of Southeast Asia at Exhibit 3!)

Therefore, the Vaishya were a possible medium for the transmission of Indian influence.

Indianisation wasn't just the exchange of traditions and practices - it also involved complex and abstract topics such as about politics, kingship or the universe.

As merchants were of a low caste, they most likely wouldn't have sufficient knowledge in such fields and would not be able to spread such concepts to the people of Southeast Asia. In addition, compared to the Brahmin priests, they weren't as supreme in terms of power. Thus, it would be much more difficult for them to spread Indian influence over the region - a hole in the Vaishya theory.

So, what theory is most widely accepted nowadays? Continue on to the last part of this exhibit to find out!
Powered by