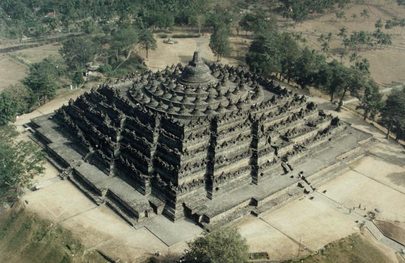 Candi Borobudur is estimated to have been founded around 800 AD. It is a large Buddhist temple in Magelang, Central Java, Indonesia. Much like Angkor Wat of Cambodia, the temple was built to resemble a microcosm of the universe and is a three dimensional projection of the Mandala. Made up of concentric circles (see image), cosmic power is believed to enter the temple at the centre and radiate outwards.

It also provides a visual image of the teachings of the Buddha, showing the steps each person must follow in order to achieve enlightenment. There are 1460 bas-reliefs carved from the bottom to the top of the temple about Buddhist stories and the way to being a Buddha, for example the life of Siddhartha Gautama and other legendary figures. 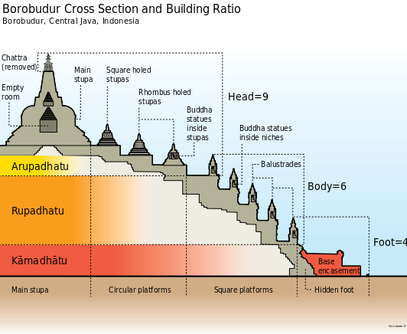 In summary, the temple serves as both a representation of the Mandala and a visual image of the teachings of Buddhism.

How does this show evidence of indianisation?

The concentric circles of Candi Borobudur are a three dimensional representation of the Mandala. This concept is Hindu in nature and is believed to have been brought to the region from India. The fact that it has been depicted by a temple as great as Candi Borobudur shows the great effect of Indian influence on Java and Southeast Asia.

In addition, Candi Borobudur is a Buddhist temple. Buddhism is a religion that was brought to Southeast Asia by the Indians, and these temples clearly evidence this.

Furthermore, the temple also contains many bas-reliefs portraying scenes from the Mahabharata and the Ramayana. This shows that these stories were clearly influential in early Southeast Asia as they repeatedly adorn the walls of the temples, which were seen as sacred places.

Therefore, Candi Borobudur is a good example of Indianisation's impact on Southeast Asia. Being a projection of a Mandala, this indicates the borrowing of concepts from India. In addition, it also shows how Indianisation resulted in the pervasive spread of  Buddhism - a religion that is still immensely popular in the region today - to the local people. The constant depictions of the famous Indian epics also show that they must have been important to the people of Southeast Asia. 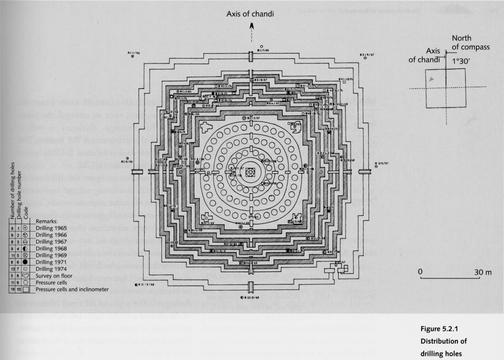 Note the resemblance to the symbol of Mandala!
Bas-Reliefs at Candi Borobudur
Click here to continue.
Powered by