first of all, what is a bodhisattva? 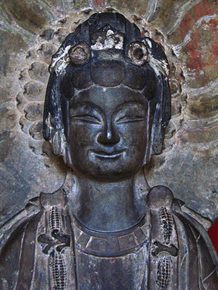 Bodhisattva is one of the four sublime states a human can achieve in life, according to the Buddhist religion.

He is a Buddhist who has attained enlightenment. However, as a selfless act, he delays entry to Nirvana in order to help others attain enlightenment too.

Since self-sacrifice constitutes part of being Bodhisattva, his smile depicts his compassion and morality, as well as the values of love, harmony and peace.

It also tells us that the Bodhisattva has attained the Buddhist concept of enlightenment, meaning he has achieved true happiness, where there is limitless compassion and an end to all suffering.

So how is this related to indianisation?

Buddhism was spread to the region from Northern India, bringing along Buddhist concepts such as the Bodhisattva.  There various statues depicting the Smiling Bodhisattva present in the region, such as at the Angkor Thom Bayon Temple in Cambodia. This shows that one lasting impact of Indianisation was the spread of Buddhism, which is still the majority region of Thailand, Cambodia, Laos and Burma.

Statues of the Smiling Bodhisattva at the Angkor Thom Bayon Temple:
Click here to continue.
Powered by