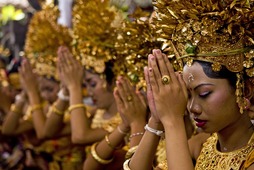 Even after Hinduism declined in the region, it is still the majority religion of Bali, Indonesia. In fact, approximately 83.5% of Bali's population adheres to the religion of Balinese Hinduism, showing the lasting influence of Indianisation.
However, there are also several differences between Balinese Hinduism and Hinduism in India. The first difference lies in the caste system. In India, the caste system is a form of social stratification characterised by endogamy and hereditary transmission of a lifestyle. As such, people have to adhere to the strict regulations of the caste they belong to. There are also many different castes, with about 3000 castes in total and over 25,000 subcastes.

Also, there is no dowry system for Balinese Hindus, as opposed to Indian Hindus who have to pay thousands of dollars to the bridegrooms family upon marriage of their daughter.

Apart from that, Balinese Hinduism also lacks the traditional Indian Hindu emphasis on rebirth and reincarnation, and is instead more concerned with local and ancestral spirits. This could be a result of the animistic beliefs of the local people prior to the Indianisation of Southeast Asia, resulting in syncretism where Hinduism is modified by pre-existing animistic ideas.

These differences indicate that although Hinduism was spread due to Indianisation, the religion was also adapted to better suit the needs of the local people of Bali, proving that Southeast Asia wasn't merely a passive recipient of Indian influence.

One Difference - The Caste System:
Now, let's move on to the last segment of this museum!
Powered by