firstly, what's it all about? 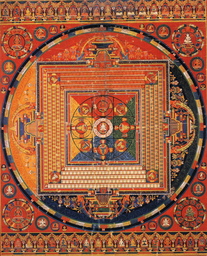 The concept of Mandala originated from Hinduism in India. It is a religious symbol representing the universe and has spiritual and ritual significance in both Hinduism and Buddhism. As can be seen from the picture on the right, most forms of the Mandala consist of a square with four gates (each in the general shape of a "T"), containing a circle with a centre point. Power is believed to radiate outwards from this centre point.

This symbol is also often reflected in various temples, batik and works of art in Southeast Asia.

Based on this religious concept, the Mandala has been applied as a political system in Southeast Asia, where polities are defined by their centre of administration as opposed to its geographical boundaries. This is in line with the Mandala's notion of the centre as being the most powerful.
This also means that the Mandala is a very fluid and dynamic system, as allegiances of the constituent cities may change depending on their relationships with the king at the centre of the empire. Thus, in the Mandala political system, relationships between kings or leaders and their subjects are emphasised. This is called a patron-client relationship, where the patron, in this case the ruler, possesses superior power and influence and uses this to assist the his clients, meaning the constituent cities and societies. These clients in return provide smaller services and loyalty towards the king, helping to increase his power.

Such relationships are constantly shifting. For example, a constituent city may break off from an empire and attach itself to a different political centre. Thus, in order to stay in power, moral obligations of reciprocity are expected of the king - he is expected to be generous and righteous, and maintain order throughout the empire. This is also seen in the Buddhist concepts of merit, karma and dharma, where it is believed that a leader's advantageous position is due to his meritorious action in previous lives, and hence it is his duty as a person of such status to be generous and provide protection for those below him. 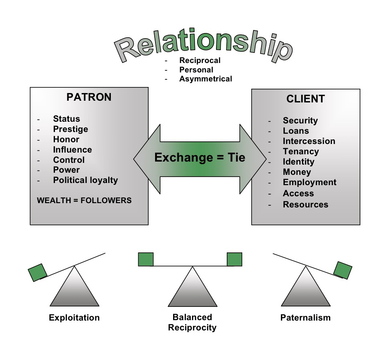 This diagram provides a more detail explanation of the above-mentioned patron-client relationship. 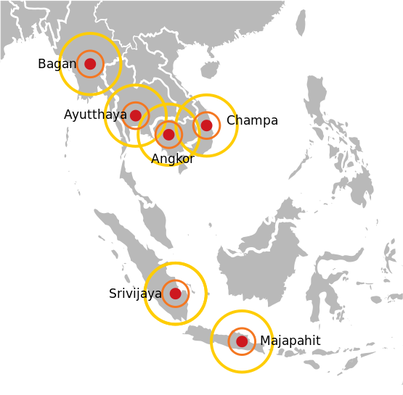 The political system of Mandala was used in the early empires of Southeast Asia. According to historian O.W. Wolters, "The map of earlier Southeast Asia, which evolved from the prehistoric networks of small settlements and reveals itself in historical records, was a patchwork of often overlapping mandalas."

This means that based on historical evidence, it can be seen that the different empires of Southeast Asia often overlapped and were not confined to geographical boundaries (see the map on the left), indicating the presence of the Mandala system throughout the region.

This Indian political philosophy was spread to the region during Indianisation. The fact that it was so prevalent in shaping the polities of early Southeast Asia, including the Khmer Empire, shows that Indian influence did indeed influence the societies of Southeast Asia.