What is wayang kulit? 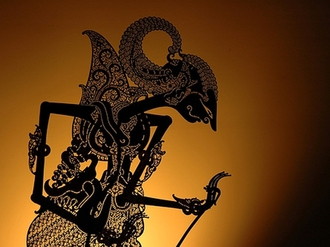 Wayang Kulit is a type of shadow puppet performance. It is more commonly performed around the Indomalayan archipelago.

Puppets range in size, and can be anywhere from 25cm to 75cm in height. They are made from buffalo or goat hide, and mounted on bamboo sticks. The best puppets can sometimes take up to ten years to make.

During a Wayang Kulit performance, the puppets are moved behind a cotton or linen sheet by a Dalang (puppet master). The Dalang tells the story, interprets characters and voices for each character, manipulates the puppets, and even produces sound effects!

It is believed that Indian traders and priests who came to Southeast Asia used shadow puppetry to spread Hinduism around the region, such as by performing stories from Indian epics like the Mahabharata and the Ramayana. This helped to attract the local people to the religion, furthering the spread of Indian influence over the region.

the influence of indianisation on wayang kulit

Even though some sources believe Wayang Kulit is indigenous to Java, Indianisation has still impacted this art in several ways. Because it was once used as a medium for spreading Indian stories, the Mahabharata and the Ramayana are still the two most popular subjects of Wayang Kulit performances in Southeast Asia. This shows that the region has adopted these Indian ideas and adapted them to suit their indigenous tradition of shadow puppetry.

Several large Southeast Asian countries, namely Malaysia, Indonesia, Cambodia and Thailand, still preserve the art of shadow puppetry today. For example, in Cambodia, it is performed during sacred temple ceremonies, private functions, as well as at public events in the villages.

It is still considered a relatively popular form of entertainment in certain areas, but Wayang Kulit is unarguably a dying art. This is because life has become more hectic, resulting in people having less time to watch a shadow puppet performance. In addition, the improvements in technology have resulted in greater accessibility and convenience to other forms of entertainment. For instance, most people nowadays are more inclined to staying at home and watching TV as compared to going out to watch a Wayang Kulit performance.

To add to that, creating shadow puppets is also extremely time-consuming and difficult. It's also not very high-paying, so the number of shadow puppeteers has been gradually declining. The small group of remaining puppeteers now faces the challenge of a lack of patronage and support from modern society as they are overshadowed by more popular forms of entertainment.

However, efforts have been made to preserve this unique art form. The fact that they still make an effort to do so despite all the difficulties shows that many still feel that Wayang Kulit is an important part of their culture and tradition.

FIND OUT MORE: The Art of Wayang Kulit
Click here to continue.
Powered by